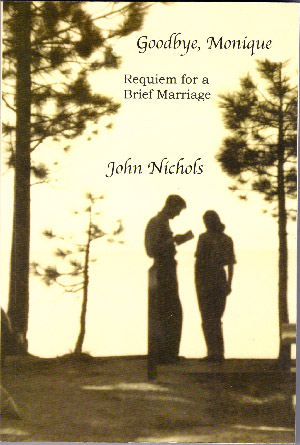 Well-known New Mexico author, John Nichols, recounts the four-year marriage of his French mother and American father during World War II. Married in Paris, France, David and Monique struggle between 1939 and 1942 to make an idyllic life in Berkeley, California. That life is soon disrupted by Monique’s refugee family members escaping the European horrors. Monique’s health is fragile, and, when John is only two, she dies suddenly and tragically. Relying on the diaries, letters, and photos of family archives at home and abroad, Nichols creates creates a moving, often humorous portrait of the father he loves and the vivacious mother he never knew. The background story is a World War that impacted every aspect of their brief, yet remarkable, union.

For many years La Jicarita, an online journal of environmental politics, covered the management of water that is so critical to the well being of both the human and natural world in northern New Mexico. But the future of that water, managed as a right of the commons, is also inextricably linked to the policies and prejudices of those at the state and federal level who are engaged in its commodification—determining its “highest and best” use, a euphemism for movement to money. If market forces continue to control who’s going to get the water there won’t be much hope for mutually beneficial ways of life, justice, or beauty. !No Se Vende! Water as a Right of the Commons compiles those years of reporting as it guides the reader through the history and struggles of those trying to keep that right alive.

These essays cover a lot of terrain: politics; family life; being a parciante in northern New Mexico; music, art, and literature; profiles; sports; travel; and cultural criticism—anything and everything that “comes via my senses . . . sometimes local in specificity but always global in application.” She quotes the great writer J.M. Coetzee’s explanation for writing his book Diary of a Bad Year: “An opportunity to grumble in public, an opportunity to take magic revenge on the world for declining to conform to my fantasies: how could I refuse?”

This book is the culmination of an oral history begun in 2000 called “Los Alamos Revisited,” which told the story of the creation of the Los Alamos National Laboratory from the point of view of the people who helped build it. The historical record is filled with accounts from scientists and pundits, but the voices of the technicians, engineers, trades people, and many others remained silent. The project recognized this as a significant gap in 20th century New Mexico history and thought it was worth trying to fill.

The story of Franny and Peter and their encounters with crows, coyote, bear, skunk, and rattlesnake. Based on Native American animal myths. Ages 3-8.

A backpacking guide with extensive information on equipment, planning, cooking (including recipes), clothing, safety, etiquette, and backpacking with children. Trails in the Wheeler Peak, Pecos, and San Pedro Parks wilderness areas are described in detail.

The introduction provides information on equipment, technique, safety, and skiing with children. The detailed trail guide describes over 80 ski tours in the Cibola, Santa Fe, and Carson national forests.

As a former wilderness patrol for Cibola National Forest, Kay’s trail descriptions are anecdotal and full of first-hand information on plants, animals, history, geology, and management.